Please note that my NES PC is not for sale

One day, I stumbled across the website www.mini-itx.com, and was amazed at some of the things people built a mini-itx motherboard into. These tiny (170x170mm) boards had been crammed into toasters, pictureframes, oil cans, breadbins and all sorts. One of them caught my eye – a Nintendo NES console. “I can do that!”, I thought.

Very soon, the parts had been ordered – one EPIA-800 mini-itx board, a 55W laptop style PSU, and a convertor to allow a laptop CD-ROM drive to be used on a standard IDE channel. I already had a spare hard drive and some ram, and salvaged a CD-ROM drive out of a broken laptop. I was ready.

Or not. I was missing a NES! Actually, I already had a NES, but I was damned if I was going to destroy a working machine to make my NES PC. I asked around on the newsgroups to see if anyone had a non-working NES they could sell me, and a helpful chap called David Boyd sent me one for the price of postage. Cheers, David! Now I was ready! 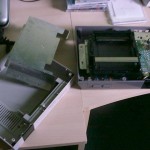 1. First things first: open up the NES (save the screws!) and remove all the NESy bits from inside. 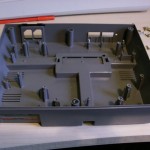 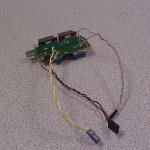 3. This is the button assembly. I wanted to use the NES buttons on the PC, so had to remove some metal from the power button (to stop it staying in when pressed) and soldered some salvaged PC cables on. These fit the power, reset and power LED pins on the motherboard. 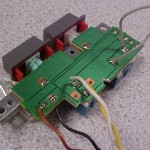 4. A close-up of the soldering. Note that I cut some chunks out of the board to avoid shorting – my soldering skillz are not 1337 yet. I then taped over the soldering with electrical tape to insulate it. 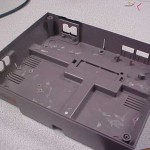 5. Using a Dremel, I cut off all of the vertical screw hole bits, except for the four corner ones – those are needed to screw the case back together! 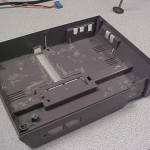 6. To make a space for the hard drive, which I wanted to sit under the motherboard, I cut out some of the risen plastic at the back of the case. Of course, this made a big hole, but I could live with that. The hard drive is a slimline one, so is almost the same height as the remaining plastic. 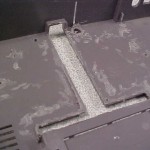 7. I sanded the plastic edges down so that they were almost gone completely. The marks in the plastic you can see are just scuff marks – I haven’t spilt glue in there or anything. 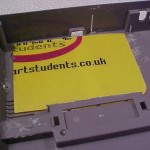 8. I decided to cut the front off a mouse mat to fit over the hole in the base of the case. I drilled a hole through it and the case to allow me to firmly afix the drive. 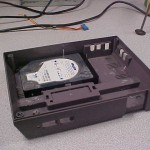 9. As you can see, the hard drive fits pretty well. Note also that I have removed the joypad sockets and cut out the bit of plastic between them. All will become clear… 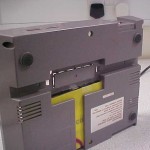 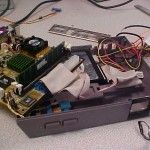 11. A test to see if everything fits. “No” being the obvious answer. A bit of reshuffling everything should be able to cure that problem, however. 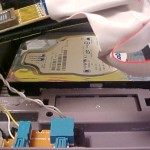 12. The motherboard will rest happily on the hard drive and the edge of the NES power button board. Of course, the bottom of the motherboard needs to be insulated from them, so another mouse mat (also yellow) is employed. 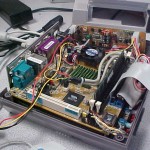 13. Another attempt at cramming everything in. I’ve cut a rectangular chunk out of the back of the bottom of the case, to hold the bottom of the mini-itx backplate. Also notice the custom USB concoction in the middle: the EPIA board doesn’t have a standard USB header, so I used a USB backplate and some old CD-ROM audio lead plugs along with these instructions. 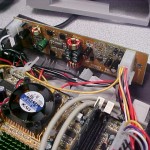 14. This is where the power board is going to go. It actually wedges in quite well, and with the case shut it won’t move. Note the USB ports again – they’re the joypad ports now! The power socket is in a little hole I drilled in the back of the NES – just below the original DC power socket. 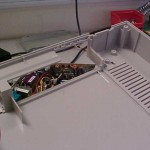 15. I chopped some bits out of the top of the case of the NES too, partly to fit the CD-ROM drive, and partly to allow a bit of space for the ATX connector on the motherboard. The drive was attached to the case with heavy-duty gaffer tape. I also cut a rectangular piece out of the back for the top part of the backplate. 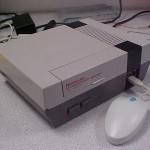 16. Fingers crossed, the whole thing was carefully fitted back together. It was a tight squeeze, but with clever IDE cable folding, it all went in. 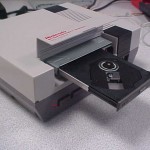 17. And here it is with the power on and the CD-ROM drive open. I now have Windows XP installed on it, and it is connected to my TV. Naturally, the first game played was Super Mario Brothers!