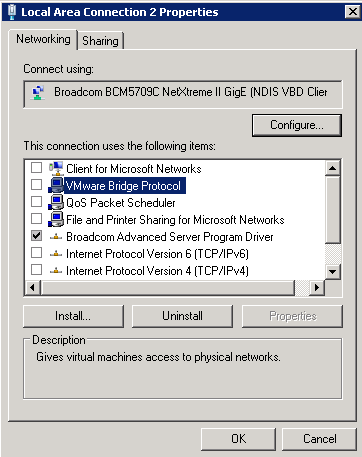 One of our virtual servers, which runs Apache and serves up a booking database, had been having intermittent network issues. It would be working fine for a few hours, or days, and then would “drop off” the network.

Rebooting the host server fixed it for a while, but then it happened again. It’s odd, as another VM running on the same VMWare (2.0.2) server was seemingly fine.

Anyway, it turns out the issue is due to VMWare not liking the fact the host server had two network card (each 1Gb) “teamed” in combination to the guest OS network being configured as “bridged”. For some reason, it causes the network to randomly drop out – especially if the network cards are Broadcom, team managed with with Broadcom software. Guess what we’ve got?

The solution appeared to be counter-intuitive, but somehow actually works. For each of the teamed NICs (not the team itself), you need to disable the VMWare Bridge Protocol. We didn’t even need to reboot – It Just Worked(TM).

And why did the other guest VM work fine all the time? It used Shared networking, not Bridged!