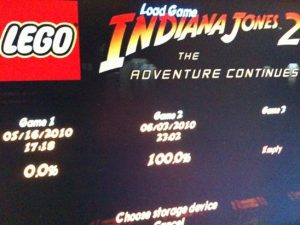 Well, it’s about time I finally completed something! It’s been months! Admittedly, I’ve been somewhat busy for the last couple of months, and consoleless for around a month of that time, but still.

Not only have I completed Lego Indiana Jones 2 today, but I then went on to 100% it. Since I’d been playing to get 100%, that wasn’t too long afterwards as I’d already done nearly everything necessary. The final few % came from just buying stuff in the Creator mode, which was a bit unsatisfying. I still have two achievements left to get though.

My overall verdict of the game? Pretty good. The hub worlds were a bit confusing to start with, but I grew to love them and I hope future Lego games also have them. The levels themselves were a little short, and the Super Bonus Levels were pretty rubbish (not a patch on the equivalents in previous titles, anyway) since you just smash trees and collect studs.