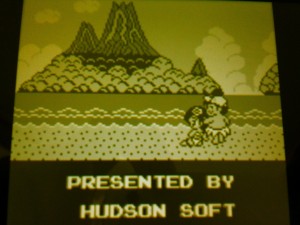 This was up on the 3DS VC this week. I wasn’t going to get it, as I had other things to be playing, but when I hopped on to the eShop to see what else was newly available, I suddenly got the urge to play it.

An hour and a half later, I’d finished it.

I actually really enjoyed it. Sure, it’s a bit simple. Yes, it’s pretty easy (especially the bosses – if you’ve got a dinosaur to ride when you get there, they’re defeated in seconds). Indeed, it is quite repetitive with each island having a similar looking set of levels to each previous one. But I liked it.

One of the major differences between the Adventure Island games and other platformers is that you have a very strict time limit, which you can delay by collecting fruit. You can’t explore much or you’ll run out of time, so I didn’t. However, I wish I had done some more exploring, as I found a secret warp on World 6 (of 8 ) and realised I’d probably missed loads of secrets. Tch.