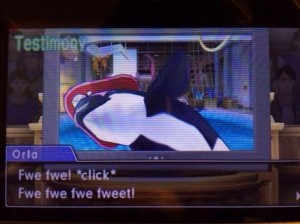 This DLC, self-contained case was released for Phoenix Wright 5 (yes, I know that’s not the title, but look at this post’s title – huuuuge!!) last week, and, having just finished the main game I was eager for more and immediately downloaded it. £3.99 seemed like peanuts for more Phoenix. And it was.

I’ve just finished it, and it’s certainly one of the more… out there Phoenix trials. I mean, you just have to look at that picture there to realise that. I’m cross-examining a whale.

The case was pretty long too. After a few hours it seemed like I was on the final straight, but then a spoiler happened and I realised I was actually only halfway through. In total this case took about 7 hours, so no complaints on length. No complaints at all, in fact. It was glorious.

And new character Marlon Rimes is the best character ever. I mean, he’s a rapping pirate animal feeder. What’s not to love?