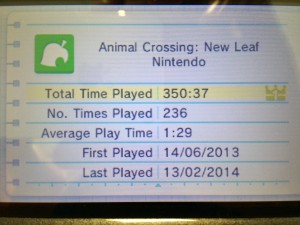 This week I hit the 350 hours played mark. That’s a lot of hours. I’m pretty sure that’s more hours than I’ve spent on any previous game in the series, and I wouldn’t be surprised if it’s one of my most played games ever. And yet… I’m still playing every day, and I still feel I’m nowhere near done. 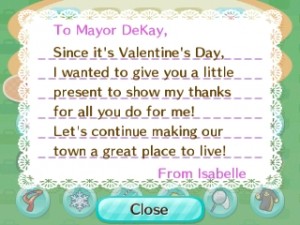 Sure, there’s a load of furniture I’m missing (much of which I’ll probably never get – like the Ice stuff, and some of the other missed seasonal special things), but I’m also well off completing my museum, with still only about 6 pictures and statues on display, and around a third of the fish and insects still unaccounted for. Not only that but many of the town works I crave so much are just not forthcoming. Cheese must remain Flower Clockless and Devoid of Lighthouse for a bit longer, it seems. And badges? I’ve not even half of them. So much to do, yet I spend most of my time sending letters full of fertiliser to Agent S. She loves it.