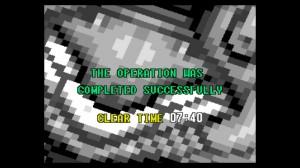 And that’s it. Samus saved the day (although, in the end, all she saved was herself – spoilers). The game was completed in 7 hours 40 minutes, and with a collected items percentage of 79. I’m surprised it’s as low as 79%, as although I didn’t attempt to get 100%, I did search pretty much everywhere and only knowingly missed three upgrades – two missiles that I saw but couldn’t figure out how to reach, and a Reserve Tank that I never actually saw. I got all the Energy Tanks though, as I assumed the final boss would be a nightmare and I’d want as much health as possible. 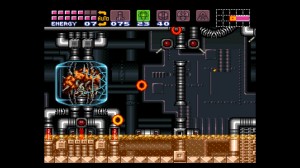 It’s genius, then, that how much health you have is completely irrelevant to the final fight. OK, so shooting Mother Brain Inna Jar is tricky with all the Evil Party Rings of Doom, but they don’t do a lot of damage and Mother Brain herself doesn’t attack until after the jar is destroyed, and it’s at that point health is pointless. 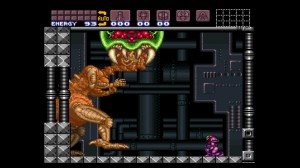 You see, she transforms into a monster thing who unleashes everything at you, and is a rocket sponge. After all my missiles, super missiles and power bombs were depleted, she fired a multicoloured beam that drained me of almost all my energy (see? It doesn’t matter how much you have), then was about to finish me off when Baby Metroid (Oh! How he’s grown! Hasn’t he just? How adorable!) returned having almost sucked me dry not ten minutes earlier before he realised I was his mum. He then latched onto Mother Brain and appropriated her essential juices, before transferring them to me, restoring my health. In the process, Mother Brain reanimated and started attacking Baby Metroid, destroying her. Aww. 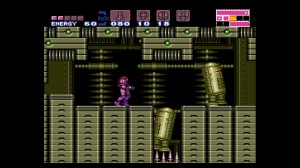 Still, I’d recovered by then, and had a new rainbow beam power thing which made short work of what was left of Mother Brain, and then (of course!) a time bomb was triggered and I had to run back to my ship very fast. The end!

Yes, I’m aware I’ve missed out a lot of stuff from between my last post and the final boss. There’s just too much good to say about the game. I loved the pacing, the music and the exploration. There’s always something great about getting a new ability in games like this, that allows you to get past a room you were scratching your head over previously. Slowly building you up to be a virtually unstoppable powerhouse with each upgrade and item. 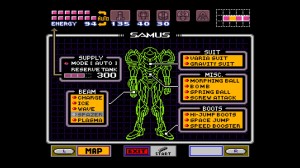 It may be a game from 1994 (that’s TWENTY YEARS AGO), but it hasn’t aged. The pixels are still beautiful. The gameplay is timeless. Some people said they didn’t think it’d stand up today, especially coming to it now having never played it before (which I haven’t), but they were so very wrong. If this was a new release now, it would stand up perfectly against current titles. One of the best games I’ve ever played. I’m just amazed I’d managed to miss out on it for so long.