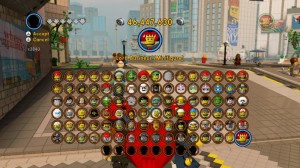 I do love a good Lego game. I’m actually quite keen on the bad ones too, although there aren’t really any. None I’ve played, anyway, and I don’t count any Lego game that isn’t the now-standard collect everything smash everything OCDfest style Lego game.

However, despite all of them (even the Harry Potter ones) being generally fantastic, most are full of bugs. Very few have failed to not lock up my console at least once, and most have scripting errors where triggered events don’t trigger. This game, however, is the very worst when it comes to bugs. So. Many. Bugs. It’s like that bit in Wreck-It Ralph where all the eggs hatch.

Bugs, not limited to the following: 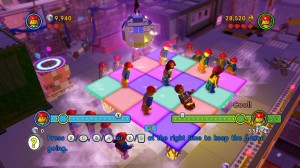 BUGS. And that’s not my only complaint. This game is really short. I think the previous most shortestest Lego game I’ve 100%ed was Lego Pirates of the Caribbean (which also happens to be the previous most buggiestest too), which I think took about 9 hours to finish, and about 30 to 100%. Lego Movie took 8 hours to finish, and 12 hours to reach where I am now at about 82%. The rest is just gold instruction manual and hidden pants mop up – I’ve done all the red bricks and characters already! 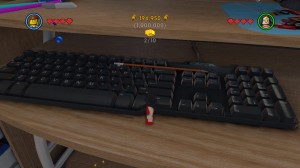 But none of this really matters because the game is great. The characters and cutscenes (mostly ripped right from the film) are great. It’s all great. But not Everything is Awesome, sadly.

Perhaps the release date was tight as it needed to tie in with the film. Perhaps it’s a bit simplified because it’s aimed a little more at kids than previous titles. Maybe it’s just the Wii U version hampered by all the bugs (although I suspect not). Whatever it is holding it back is a shame, but even the worst Lego game is still a great Lego game.