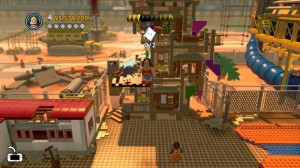 Just a quick post here, really, to say I’ve now 100%ed it. In total it took about 16 hours, so is definitely the shortest Lego game ever. Ever.

As it turns out, free play mode is even more full of bugs than normal Story mode. The main reason seems to be because of sequence breaking – all too often you can break the scripted sequence of the game (skipping areas or puzzles because you now have character abilities that allow you to), but most of the time this prevents the game from progressing as something later won’t trigger. The game should either prevent sequence breaking, or accept it and deal with it in the game logic. 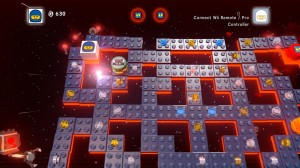 Sure, the same issues are in many Lego games, but nowhere near as frequent or serious as here! It all feels like the game was rushed and not playtested enough, which is a shame. Still, I did really enjoy it.

Except for one section. On the way to Flatbush Gulch you freefall through a portal. After a corner in the sort of tunnel you’re in, there’s a gold instruction page to grab. Which is impossible. Until you’ve tried it a million times, quitting to the hub (loading…) then reentering the level (loading…) each time. Over and over. And over. AND OVER. Gah.