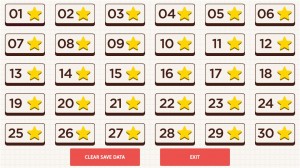 I was able to get hold of a free copy of this from someone, and felt a little guilty I hadn’t spent the feeble 89p or whatever it usually costs. Having played it, though, I’m not any more.

It isn’t a bad game at all, but it suffers from two problems: It’s too random, and it’s too short.

The idea is to tap on grey blocks, making all of them disappear, leaving a single red block balanced somewhere without it falling of the bottom of the screen. For the first few levels, it’s mostly puzzle based – remove the blocks in a specific order to make the red one fall as you need it to. After that though, there’s a clear idea of how you’re supposed to finish the level, but the sliding and falling and bouncing is too random. You can do almost the exact same sequence of taps several times in a row and get completely different outcomes. By the end, it just becomes luck or perseverance as to whether you win or not.

And the end comes far too quickly. There are only 30 levels, with each taking less than a minute to complete, even if you have to try multiple times. The game isn’t even long enough to allow you to review it on the eShop – you have to hit an hour’s play to do that! There’s zero replayability too, so little chance of me reaching an hour. How hard could it have been to double or triple the number of levels?