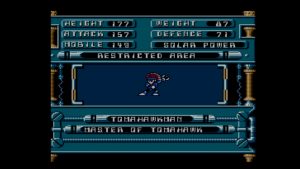 After the slight drop in quality that Mega Man 5 brought to the series, I was glad to see that things improved for the final NES Mega Man outing.

As I’ve mentioned before, each game so far has added some new move, add-on or feature to the series. Mega Man 6 sort of brings two, as Rush is removed as a rocket/trampoline and becomes a sort of exoskeleton for Mega Man, giving him two new powers – a jetpack (which works for a very short amount of time) and a power suit which allows you to break cracked blocks (much like Guts Man’s power from the original Mega Man) and destroy some otherwise invincible enemies. 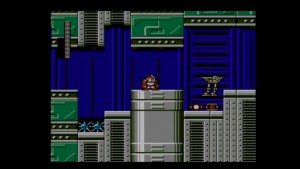 Most of the levels also include branching paths, including two different locations for the final bosses in each of the first 8 stages. Finding the alternative location results in an extra item in addition to the power that the boss normally leaves behind. Four of these items are the letters BEAT, which provides you with, obviously, Beat from Mega Man 5. I had to redo one of the levels to get the B as I’d missed it, but it wasn’t worth doing as Beat has absolutely no use anywhere in the entire game. 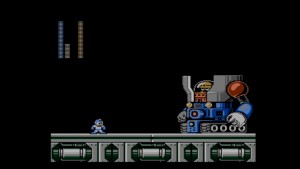 Once more, the difficulty of the game has been reduced, meaning that apart from Mega Man 5, the games did get progressively easier as the series went on. In 6, this was in part because of the abundance of E-Tanks, but also because of the ridiculously simple to beat final boss(es) and some of the alternate routes in the levels (almost all of which I took) seemingly miss out large sections of the game.

And that’s it. All the NES Mega Man games done. End of an era, or something. Thankfully, there are plenty more SNES titles to work through next! Final best-o-meter: 6>4>5>3>2>1.