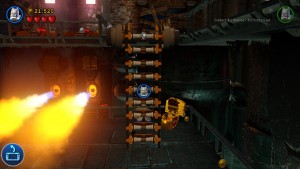 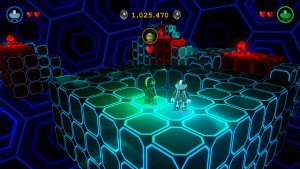 Lego Batman 3 doesn’t deviate from these blueprints set out in so many previous Lego titles. It refines them, modifies them, expands on them, but the structure is ultimately the same. You’d think, after playing what must be almost a thousand Lego games, I’d be bored of the formula and seen everything Travellers Tales have to offer, but no – they keep coming up with more addictive and playable titles. 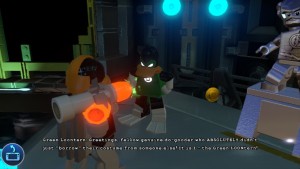 The main improvement over Lego Batman 2 is the massively increased roster of characters. Even in Story Mode, you get to play as most of the Justice League (but not Hawkman – there’s a running joke about him being trapped under the Hall of Justice), a pile of villains, several Lanterns of assorted colours, and more. Once you start unlocking more characters, you realise there are hundreds of them, including Daffy Duck as the Green Loontern, 60s Batman TV series characters, and even Kevin Smith. Travellers Tales have also fixed one of the main complaints with previous Lego Batman titles – cycling through all the various suits for the characters. Now, most of the time, standing where the suit is needed and pressing A will swap you to the correct costume automatically – very useful!

Sadly, the open world of Gotham City is absent, replaced with several small hubs: the Batcave, the Hall of Justice, the Watchtower, some Lantern homeworlds, the Moon, and so on. Although there’s a lot to do, probably as much as in Gotham overall, it’s not as impressive. I realise they couldn’t just stick Gotham in there again, but why not Metropolis or Coast City? The latter especially makes sense given the Green Lantern-focussed story.

Oh yes! The story! At the end of Batman 2, Brainiac was en-route to Earth, and in Batman 3 he nears it and starts turning cities into bottle cities and then shrinks the entire planet. Several of the early levels are then set in these cities which as well as being shrunk, are entirely constructed from Lego (which is borrowed from The Lego Movie The Game of The Lego Movie: Lego The Movie Lego Game). Brainiac has used the combined power of all seven coloured Power Batteries to do this, and it’s up to The Justice League, who, teaming up with DCs Most Wanted Villains (And Cheetah), have to reverse the damage and defeat Brainiac. 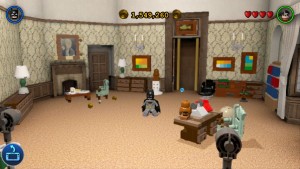 As always, the game is filled with humour. The dialogue is funny, and a lot of the “background action” with other characters doing stuff while you’re supposed to be paying attention to the foreground action is not to be missed. There are loads of nice touches that make you chuckle too, for example the character select screen. Hover over Batman and you can hear him singing “Nanananananananana Batman!”, but do the same over other characters and…  “Nanananananananana Plastic Man!” and “Nanananananananana Cheetah!”. Every level also has an Adam West minifigure that needs rescuing, with plenty of cheesy puns and one-liners from him (the actual Adam West providing the voice too) as he awaits your assistance. 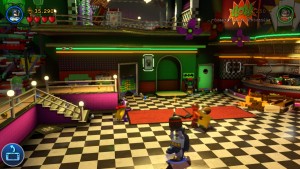 The best bit is a bonus level accessed from the trophy room in the Batcave. There’s a Lego set of Bruce Wayne’s manor office from the 60s TV show, complete with bust you punch to reveal batpoles behind – just like in the series. Pop down the poles and you’re suddenly in a Lego episode of Batman from that era, complete with comic book cut scenes and biffs and zonks as you fight. Adam West narrates the short plot, and most of the TV series baddies make an appearance. Even The Joker has badly applied white make-up over the top of a barely hidden moustache – just like Cesar Romaro did, famously because he refused to shave it off for the part. Batman and run around carrying a bomb, as a callback to the film of the series, and naturally, the level ends in a dance number. Of course. 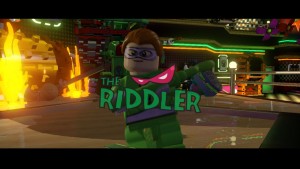 There’s a lot to like in the game, and although it has the usual Lego game bugs (I broke one scripted sequence, and I managed to get stuck behind scenery twice), it’s definitely one of the best of the series. I’ve completed about 30% of it so far, but have barely touched Free Play mode, so I’ll be a while yet!