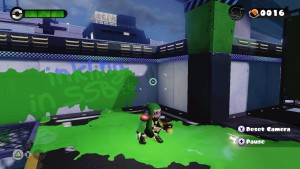 Following the “test fire” event, which was less a demo and more a server stress test, my opinion of Splatoon went from “Oh, that looks nice” to “OMGNEED”. I’m not a big fan of online shooters, but this was different. Shooting the opposition was a secondary task, as the aim is to paint as much territory as possible. Although most players seemed to forget this and treated the game as a deathmatch. Anyway, the way it played out was much more appealing to me than I originally expected, and so when the game was released yesterday, I bought it. 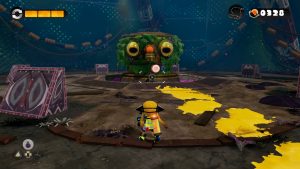 Sadly, this coincided with my internet connection breaking, only to run at dial-up speeds. Online play, the main point of the game, was off. Bah.

Instead, I set about playing the single player mode. I wasn’t expecting much as the effort and focus in the game is clearly online play, but I was pleasantly surprised. It’s a fun, clever and varied, with some great boss fights. Especially the final one – he’s fantastic. 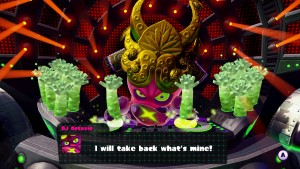 It was a bit easy (bar that last boss), and sadly quite short – although it was made a little longer as I replayed all the levels to find the hidden scrolls on each – but it was well worth playing. Now I just need my broadband sorting out so I can play the main bit of the game!