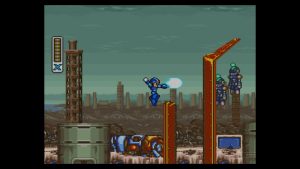 It’s taken a while to finish this off, but not because it was especially difficult or long – more because I’ve been playing it sporadically and in short one or two level bursts.

Unsurprisingly, it’s a lot like Mega Man X. And better than Mega Man 7. I was a bit frustrated that there’s a certain point in the game that you reach (the final robot master before the Sigma levels) where, if you haven’t managed to retrieve all the parts for Zero, you can never return and get them. Of course, I didn’t even know they existed until it was too late. As it turns out, collecting them makes a fight with Zero later on a lot easier, but I beat him first time anyway. 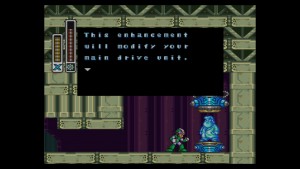 Still, I could return to earlier levels and get all of X’s upgrades, which was good.

The final Sigma levels were pretty easy, and the bosses – which like usual seemed impossible at first – ended up far easier to beat than most other Mega Man games, especially the final Sigma boss itself.

Was it better than X, though? I don’t think so. Better than 7? Yes, certainly. In fact, lets wheel out the order and extend it.