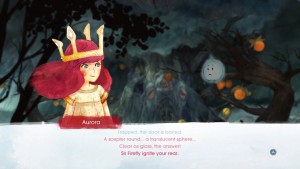 If there’s one negative thing to say about Child of Light, it’s the diabolical dialogue. All of the conversations and narration take the form of terrible rhyming couplets. Rhyming couplets that are forced, contrived, often don’t rhyme, and very rarely even scan. At first it feels clever and cute, but after a few minutes you’d rather everyone just spoke properly and it grates for the next twelve or so hours until it’s complete.

Which, yes, it is complete. 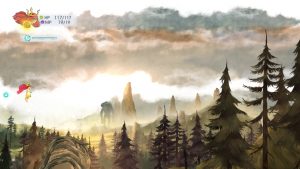 Thankfully, there’s only really the one negative thing to say about Child of Light. The rest is all good. I could say it’s a bit easy (none of my characters ever died and I used just three health potions – and no other potions at all – in the entire game), I could mention most of the characters in your party are superfluous (I rarely used more than Finn and the mouse), and I could say that for an RPG it was a bit short, but it doesn’t really matter. What is important is how much fun it was, how there was never any need to grind, how much I enjoyed the story (despite the “poetry”), and how unusual it was to play.

As well as using the same game engine as Rayman Legends, some of the Murfy sections have sort of translated to a mechanic here, too, where you move your little firefly chum around the screen with either the touchscreen or (more usually) the right stick, using him to activate and collect things. During time-turn based battles he can heal you and your allies or slow down enemies, which adds more than you’d expect.

The battles themselves, which make up the majority of the gameplay, appear like standard JRPG turn based fights. However, there’s a timeline on the bottom of the screen which all the characters (on both sides) move across. When your characters get to the final 1/5th of the bar, you can choose their action – such as attack or defend – and when they reach the end of the bar that action is carried out. If you’re attacked in that final section, your action is interrupted and you’re chucked back down the timeline again. Similarly, your foes do the same. This adds a lot of strategy to the fights, since different actions activate at different speeds you have to decide if your chosen one is fast enough to get in before it’s interrupted or countered. I’m pretty sure I’ve played a game with a similar system before, Eternal Sonata maybe? Whatever it was, it works great here.

Child of Light is definitely worth playing, and even better if you manage to pick it up in a sale (like I did!).