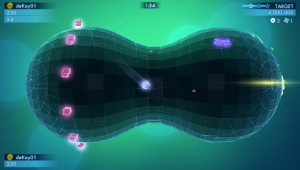 Like the awesome but mostly ignored Wii version of Geometry Wars, Geometry Wars 3 (which was a free PS+ rental this month) has a great single player “adventure” mode. Each level takes one of the main score attack modes and requires you to beat a certain score or clear a level in under a certain time with the rules of that mode, or perhaps with no smart bomb or extra lives.

In addition, every so many levels, there’s a boss (which is a new thing in the series, I think?). All the bosses are superficially the same, consisting of a large gemstone type enemy who periodically drops its shield while spawning standard Geometry Wars enemies and occasionally rushing you. 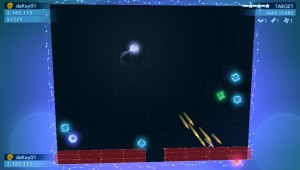 It all feels a bit like a “best of” Geometry Wars, really. It has the stuff from the first two games, and from the Wii game, and then nicks a chunk from the also excellent  Nano Assault Neo by setting many of the levels on the surface of a 3D shape rather than on a flat plane. As you progress through Adventure mode, the score multiplier Geom items also act as currency with which to buy or upgrade special weapons and drones.

Frankly, it’s superb and my only issue with the Adventure mode is that the final boss is a massive, massive difficulty spike. I easily spent as long attempting that single level than I did on the previous 49 levels combined! A single life and multiple “phases” and attack patterns, along with insta-death walls did not make it simple.