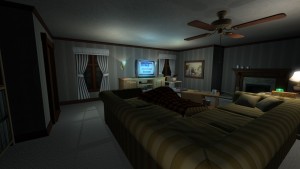 Gone Home, the game I kept writing “Grow Home” as over and over again, was in my Steam wishlist ever since I completed Dear Esther. Then, one day not so long ago, it was on sale and when I went to buy it, I discovered I’d owned it for months. Tch, eh?

Like Dear Esther, you walk around and discover what’s going on by reading things and looking at things. Gone Home includes minor puzzle elements, but for the most part, you’re exploring a slightly spooky house during a thunderstorm reading notes and letters left strewn around the rooms. The plot goes that you’re returning home after a backpacking trip round Europe, to a house left to your father by his “psychopath” Uncle. Only your family have vanished. 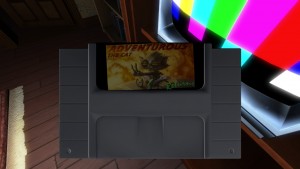 Reading journal scraps and messages left by your sister, you uncover secret rooms and compartments in the house; catching up with her explorations through her kept record of what she’s found. There’s a suggestion Uncle Oscar is haunting the house, and all was not well in the bedroom between your father and mother. No doubt her new job, with long hours, and his failed novels have contributed to this. 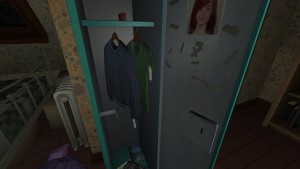 Eventually, you discover what has happened to your sister, but nothing conclusive about the rest of your family is shown. At least, I couldn’t find it if there was something. It’s a massive spoiler, but here’s what I think has happened:

Anyway. It wasn’t as good as Everybody’s Gone to the Rapture (but then, very little is), it was perhaps on a par with Dear Esther, and waaay better than Proteus.

Here’s my full (and so spoiler-filled) complete playthrough: