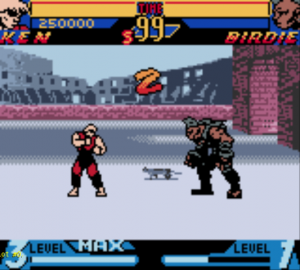 There’s no way that Street Fighter Alpha, Capcom’s CPS II based arcade fighting game, would be any good on the Game Boy Colour: A system not just lacking in buttons, but also roughly one ten-millionth as powerful. It’d be like expecting Elite Dangerous to run on a Speak and Spell. And yet, here it is, surprisingly well turned out.

It doesn’t have all the moves, characters or backgrounds. The animation isn’t as fluid (but for a Game Boy title it’s pretty damn good) and the sound effects are limited at best – not least in there’s no speech – but it feels and plays like a Street Fighter game. Most importantly, Ken is Ken, with all his special moves intact and he is best. Ken is always best.

Since Ken is best, it’s him I used to complete the game and in doing so found one major difference between this version of Street Fighter Alpha and the Saturn one I used to play so much: the Game Boy Colour port is incredibly easy. I only lost one round in the whole game (versus Birdie, if that matters) and even that was close. Final “boss” Ryu was a complete walkover.

Crawfish have worked miracles with the GBC hardware to pull this game off. They did it again with the Game Boy Advance port of Street Fighter Alpha 3 too (which I also played, briefly, a few days ago) but somehow that endeavour seems more feasible. At least the GBA is a 32bit sprite-pumping powerhouse to begin with, whereas the GBC is a calculator. Incredible.