Eagle-eyed readers will have noticed that I haven’t posted anything here for a few weeks. There’s a good reason for that: No Man’s Sky came out.

It has been a long time since I’ve seen any game divide players quite so much, as it seems everyone really does love it or hate it without much of a middle ground. I can see where the haters are coming from, but for me, it is almost exactly what I expected it to be. 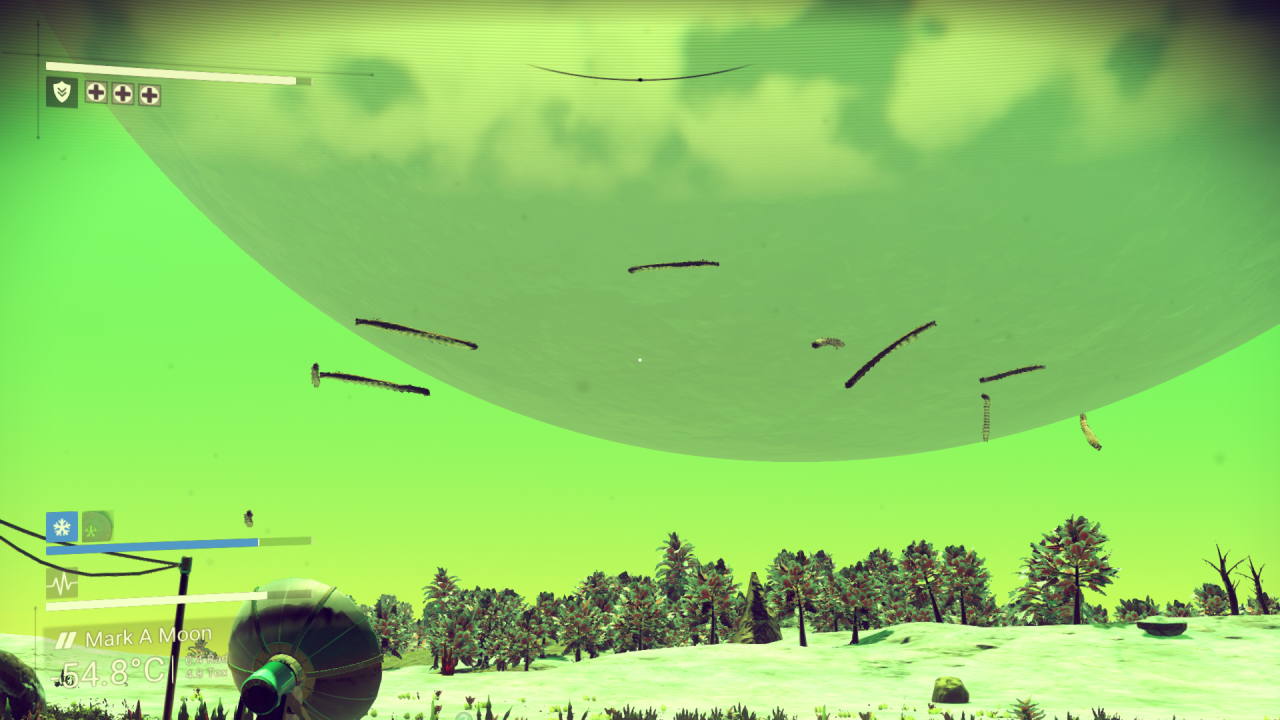 Perhaps that’s because, after the first few videos of the game way back years ago, I stuck No Man’s Sky on media blackout. I’d seen enough to excite me, and everything else was spoilers. I preordered it as soon as it was on the Playstation Store, and eagerly waited for it to unlock. My first hour or so with the game is documented here, so I’ll skip over that. Since then, though?

It has been incredible. Yes, it’s much shallower than perhaps it looks. Despite the infinite possible combinations of planet, weather, flora, fauna and landscape, and the fact every location is pretty unique, sure – there’s a lot of repetition. The same buildings, animals, rocks and plants (or very near facsimiles) appear all over the place, and the conversations you have and machines you interact with all become overly familiar far too soon. 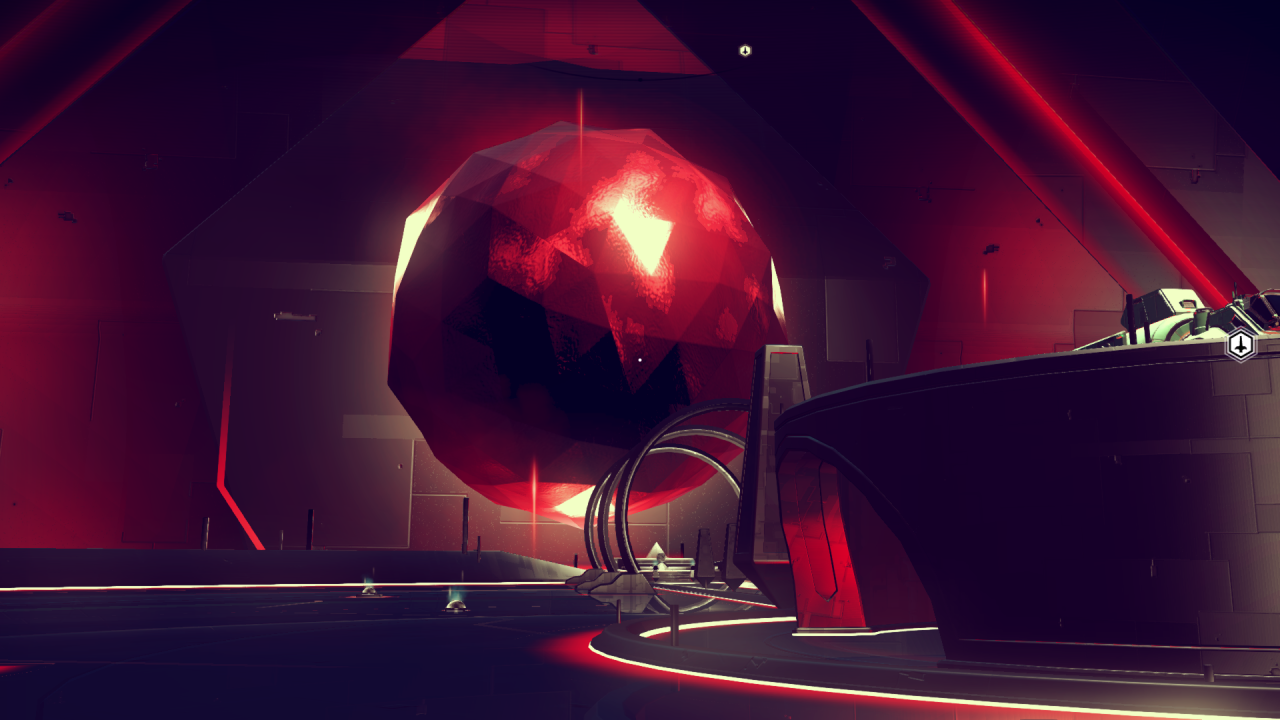 I say too soon, but in reality, I’ve spent over 80 hours on it so perhaps not soon at all. Not that it matters, because I’m still having an enormous amount of fun, exploring worlds and tracking down all the creatures on it, or playing grab-and-run with valuable detritus, legging it back to my ship or a shop with angry sentinels on my tail. Perhaps, on a laid-back planet I’ll disembark from my craft, point myself vaguely at a distant marker, and take a stroll. Along the way I may see many new things, have a swim, stumble across some rare materials, or (and this is common) fill my inventory miles from anywhere and have no ship to help we travel to a shop to flog the lot. And you know what? That’s still great.

There’s some low level crafting, and equipment to improve, replace or repair, your mining/shooting/grenading hybrid multitool to constantly swap for more capable ones, and a plethora of ships to find or buy. All of which is fine, but the best bit for me? Just wandering round, taking it all in, and trying to make as much money as I possibly can from selling my findings and uploading my scans. 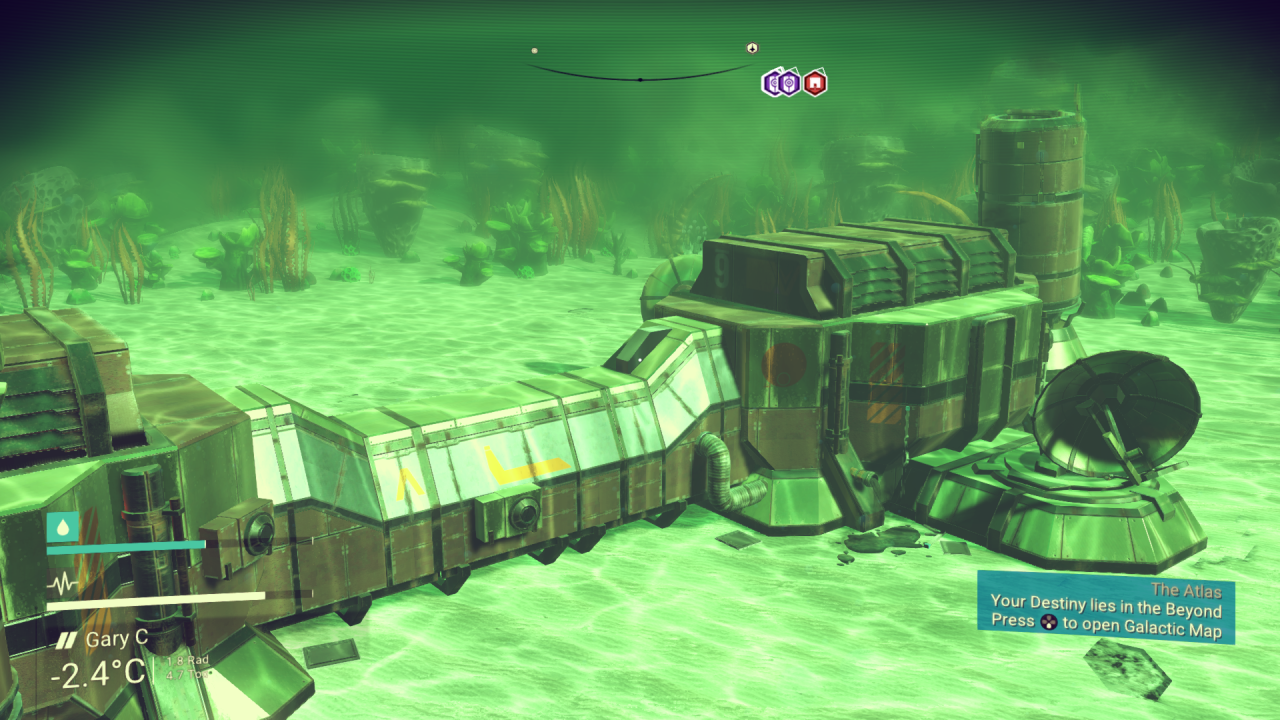 I’ve been naming all the systems and planets (all boy’s names, four letters – that’s The Rules), and scanning everything like I have OCD. This is where I think others have felt let down: They wanted more to do. People to shoot, animals to hunt, multiplayer, more variety. Bases to build and more crafting stuff, more purpose and proper goals. I can see that, but none of it matters to me as No Man’s Sky appeals to me just how it is right now.

As I see it there are three goals in the game, which I hear have no real rewards. There’s completing the Atlas Path, which I’m halfway towards now (it would be quite a quick task, but I keep getting sidetracked), getting all of the Journey Milestones (such as do so many warps, destroy so many ships, make so much money, etc.) most of which I have now, and reaching the centre of the galaxy, which I intend to do once the Atlas Path is done. Even if they weren’t there, though, I think I’d still be more than happy.

Here’s to another 80 hours! Oh, and if you want to see some of my No Man’s Sky videos, take a look at this playlist: