That’s two of five down already! These new StreetPass games seem quite a bit shorter than the previous ones, so far anyway.

StreetPass Slot Racer is basically Scalextric. You play by holding down A to go, and letting go of A to slow down – and you need to time doing this on corners and jumps correctly in order to get the best speed boosts. There are a fair few courses to work up through as you rank up, and the final “boss” is a head to head race with Iceman, the world champion slot car race driver. 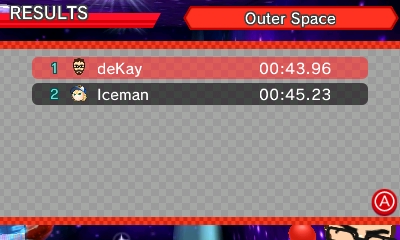 This final race was actually really easy, but unlocking him was hard as one of the challenges before him needs you to finish in under 46 seconds. THREE TIMES I managed 46.07. So frustrating!

There’s more to do now though, and some new ranks have opened up, so like Trader I’ll keep playing. It’s looking like the next one to be completed might be Explorers, so watch this space.