Along with some other games (like Year Walk), Gargoyle’s Quest was cheap on the eShop. I don’t know what prompted me to buy it, but this Game Boy classic has always interested me, at least a little due to the plot. 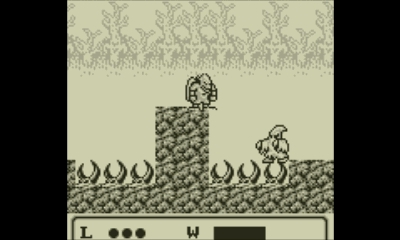 Well, what I knew of the plot – Firebrand, the bad guy gargoyle from Ghosts ‘n’ Goblins, is the protagonist in this part RPG, part platformer set in the demon realm Firebrand comes from. You quest is to defeat the even-more-evil-than-every-other-demon, the King Breager who is going to destroy Firebrand’s world.

How this plays out is surprisingly reminiscent of Zelda II on the NES, with overland travel – where random battles take the form of very short platforming sections – villages to visit, and “dungeons” which are side-scrolling platforming bits of substantial length. Firebrand upgrades his abilities to enable him to hover for longer, jump higher, or allow him to temporarily cling to spiked walls.

Unlike Zelda II, though, it’s actually possible to complete Gargoyle’s Quest, as I proved today when I did so. It is a bit janky (with lots of slowdown in sections), a couple of areas are incredibly frustrating (timing drops past spikes, in particular) and bosses that don’t get harder (the end boss is the easiest in the entire game). It also suffers from terrible dialogue, complete with spelling mistakes.

All that said, it’s a fun little title that was probably excellent when it was released, but hasn’t really aged well. I’m glad I played it though.