Imagine, if you will, a cross between Worms and X-Com. Only instead of worms and space soldiers, you have steambots, of the sort found in SteamWorld Dig. That’s SteamWorld Heist: A 2D, side-on, turn-based tactical shooter strategy game. And I really should have bought and played it months ago because it is excellent. 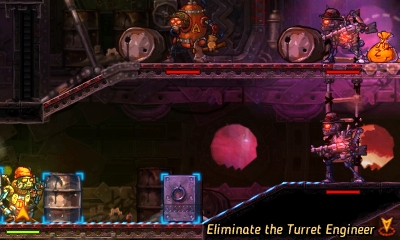 Each level involves you and a few steambots, each with different abilities, entering a ship and taking out the bad robots within. These abilities include being able to wield weapons from various classes, move further each turn, and so on. More abilities unlock as you play, increasing your health, adding secondary shooting modes, or giving you higher critical rates or steadying your aim.

The evil robots are similarly varied, and coupled with fixed gun turrets, exploding red barrels, flammable goo, orbs that provide shielding, and baddie-dispensing spawn points, the levels are pretty diverse. There are boss fights too, with some huge metal goons that, naturally, have way more energy and some unique skills and attacks. 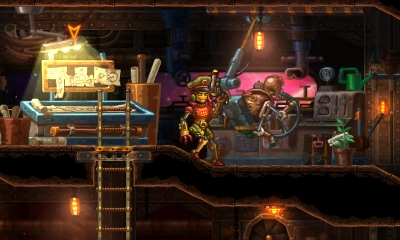 All these things are great enough on their own, but the game is taken to even higher echelons of awesomeness through the graphic style, the humour, and the levelling system. You’re rewarded for grabbing all the loot stashed around during each mission (in fact doing so is more important than offing the bots), and most levels net you an improved weapon. With each level having a possible score of three or four stars, and you can only obtain all of them by 1) not dying, 2) getting all the loot, and 3) completing the objectives, there’s replayability here too. Even more so when you realise that you can attempt any mission again only on a harder setting to boost the XP bonuses. 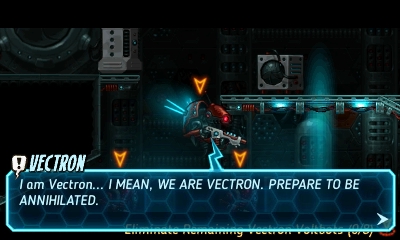 I’ve loved every minute so far, and as I’m just over 2/3rds of the way through (I’m guessing, based on Events In The Game That Would Be Classed As Spoilers), with most stars obtained so far, I’m slightly saddened to think it might all be over sooner rather than later. But wait! There’s DLC! Yay!