Readers without short-term memory problems will recall that I bought 13 games to go with my Gameking. Each and every one is special in its own special way. Special as in “special needs”, naturally.

Firstly, a few points about Gameking games. The cartridges are strikingly familiar to anyone who has ever played on a Game Boy, since they’re exactly the same as Game Boy cartridges. Almost, anyway – instead of “Game Boy” they say “Game King”, and the contacts overhang the bottom of the plastic cart casing. Oh, and they have a triangle on the back that sticks out and seemingly prevents you from jamming the cart too far into the cart slot, not that you can do that anyway, so it seems a bit pointless.

The other thing about Gameking games, is the box art. Some of it is alarmingly good. Unlike, say, the Quickshot Supervision (which is about the closest thing I’ve seen to a Gameking in terms of game quality), the game box art is really rather great, to the point where it appears that more money has been spent on that rather than the fantastic games themselves.

Of course, this isn’t even nearly true, as they’ve simply ripped off a load of pictures from other games and stuff. Clever.

So, without further ado, here are the games I bought, complete with box art and “the brief of story” blurb from the back of the box. 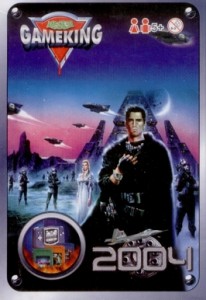 This game is obviously a sequel to 2003, which was mentioned previously. As a result, it too is a clone of the 194X series of games. This time, you don’t loop-the-loop, but instead have a smart-bomb in the form of a lightning attack thing.

Box Art Stolen From: Dune? (contact me if you know)

Annihilator I execute a special task. It needs pass through the enemy’s sea area where there are lots of planes and gunship. Annihilator I was facing one severe test. Can it finish the task?

Other notes: The box art shows an alien world, Thunderbird 2s, soldiers and a woman. The game does not. 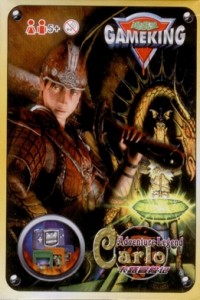 Or, more accurately, “Super Low-Res Mario Bros”. You even pick up mushrooms, and the when-you-die jingle is almost the same as the NES game, albeit a little truncated. Rather like the rest of the game in fact.

Other notes: So, Carlo is a man. Then who the heck is woman on the box with the big sword? You also get fire flowers (blobs) in this game, and the levels are even laid out in almost the same way as Super Mario Bros. 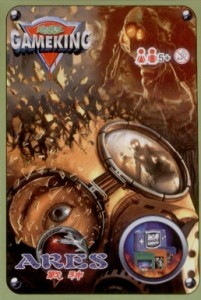 Ares (which I suspect should have been “Aries”) is an almost-clone of Xevious. Like all of the other clone-games here, it is somewhat cut down graphically, but is still just about recognisable. Just pretend those blobs are space ships and power-ups and stuff.

Box Art Stolen From: DeviantArt (Thanks ‘Andsom’ from rllmuk!)

Some day in 21st century, the earth was attached by exotic. For the safe of our earth, a batter was broken between the earth and the exotic.

Other notes: The graphics are rather too large for this game to be really playable, as there isn’t enough screen space to work with. Ace though. Obviously. 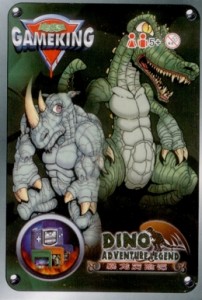 Box Art Stolen From: Could be original? (contact me if you know)

One time, during the exploration, the dinosaur name Q got lost on dinosaur’s island, and lost the connection with the otherdinosaurs. He was looking for the caverns place where dinosaurs gather together according to a map and compassion hand.

Other notes: I’d love to know what a “compassion hand” is. 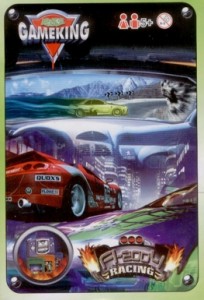 Although the game has “F1” in the title, the box art represents a “car” based driving game, not Formula 1. Not that the blobs in the game are recognisable as one or the other anyway, although the car select screens do have “proper” cars, not F1 racers. Regardless, it plays much like Pole Position, but you have to overtake 40 cars to win. Excellent.

When Ferrairi F1 control the vehicle world, MacLaren motorcade catches up with and surpass Ferrari courageously. Williams,Renault, Jordan, etc. are in competition  We push out our own new style racing-car F1-2004. It brings you vivid feeling in theworld of racing-cycle. The fans of racing-ar, let’s take action and go to experiencethe stimulus of car racing together!

Other notes: The cars you can pick are named MALRBORO, MCLARNE, WILLAM, RENAUT and JORDAN. When you start the race, some nice speech says “3, 2, 1, GO Y’ALL!”. No, it is nice – the sound on the Gameking is generally very good. 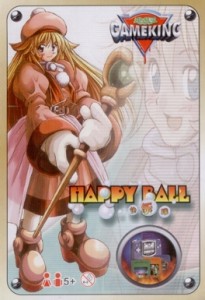 This time, the blob you control looks like Pac Man, but the game is blatantly Lode Runner. Collect blobs whilst avoiding other blobs, and create holes for the baddie-blobs to fall in. BEST!

The happy ball goes out for some food. But here comes a group of bad men who hold the place. The happy ball has to avoid the bad to look for food and he falls into trouble. Who will do him a favor?

Other notes: The A and B buttons appear to be configured the wrong way round, since the one on the left makes a hole on the right, and vice versa. 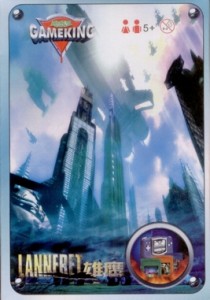 A “lanneret” is apparently a type of falcon, but the game is a clone of Choplifter. You guide your helicopter to shoot other helicopters, tanks, and soldiers (who shoot giant melons at you), and have to pick up men who are somewhat smaller than the soldiers for some reason. Blob-tastic!

Lanneret I helicopter got the task to execute one special task and save hostage. Lanneret I went through the domain of enemy and were attached by the enemy. The enemy possessed a mass of helicopters, tanks, blockhouse and army. Lanneret I is facing the challenge. Will it succeed in accomplishing the task?

Other notes: Because the “sprites” are so big, the game is virtually impossible since you crash your helicopter into things as soon as they appear on the screen. Nice Game Over jingle though. 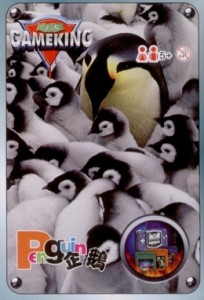 After being entertained by the superbly animated dancing penguin during the “opening sequence”, this game turns out to be a somewhat, er, “limited” version of Linux-geek favourite Tuxracer. Only with no corners. And what looks like pears to collect, rather than fish. Ace.

Have you gone to the south pole? Do you watch the penguin running? Ifnever, now you have chance to control the running of penguin. Hurry up and go touch it.

Other notes: “Hurry up and go touch it” = BEST BLURB EVAAR. 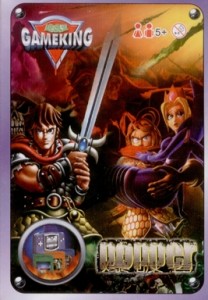 The box art here perhaps gives a slightly incorrect idea of what the game is about, since Popper is, in fact, a Bomberman clone. More specifically, a Bomberclown game, since that is what your blob represents.

Box Art Stolen From: Maximo and the Army of Zin (PS2)

In 2068, the evil’s strength turnsstrong gradually, and the wild ambition of dominating the earth of is reliving. Nanny is theleader of the justice. So the eviltreat Nanny as enemy and robhis sister Honny. Nanny slip intothe eveil and take action to save Honny…..

Other notes: The mention of “Nanny” again does make you wonder if this is a sequel to Miner. “Sequel” is perhaps too strong a word, however, since the only difference between this game and Miner is the slightly differently shaped blobs that make up the “graphics”. 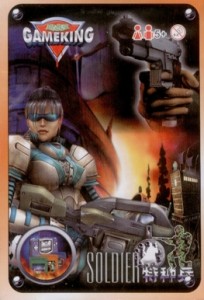 You can’t fool us, Time Top – this is just Gameking-Contra, isn’t it? Once again, the Gameking has a NES game cloned, in super-ultra-low-res, but the game still remains alarmingly similar to the original. You even spin when you jump; at least, it looks that way. Those blobs are tricky to work out.

Other notes: At least the box art is reasonably similar to the game premise in this case, although it is impossible to tell if your blob is male or female. 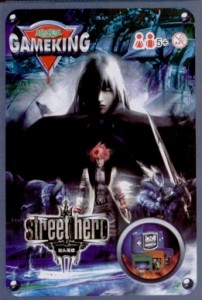 Imagine a low-res, 4-grey-shade Streets of Rage, with only two moves and one kind of baddie (bar bosses), and you have the wonder that is Street Hero. You can even collect daggers to throw, and kill everything using just a jump kick.

In XX city, Black Gang commit all manners of crimes, which controlled by Moly Brothers, the citizen hate it very much. In order to destroy it, our hero- tiger appear, depends on his excellent fight technical, he interlard Black Gang

Other notes: More misleadingness – no ninjas (like on the box art), and no haduken-style fireballs (like in the opening animation). 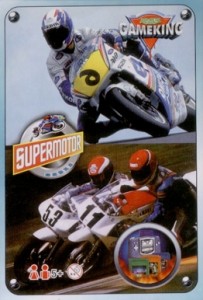 What’s this? A Gameking game which is an identical copy of another Gameking game? No way! I’m sure all similarities between this game and F1-2004 are entirely coincidental. Or not.

Box Art Stolen From: unknown (contact me if you know)

Are you ready! Let’go! New style racing car is born! We push one new racing car SuperMotor. It will lead you to a bran-new racing world. If you are a crazy racing fans, let’s enjoy the racing! If not, let’s join in firstly! It is time to train you as a super racing driver. Fans, are you ready, let’s go! 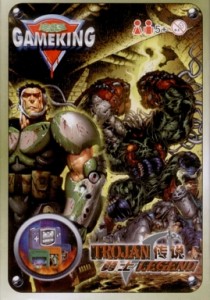 Trojan Legend plays a little like Megaman, although is much faster and obviously a million times better since it is a Gameking game. It has several levels of platform “action”, each followed by a boss-the-size-of-the-screen. Mind you, the screen is only 48 pixels high or so.

Other notes: Nice big blobs in this game, and ladders. The bosses are impressive, too.