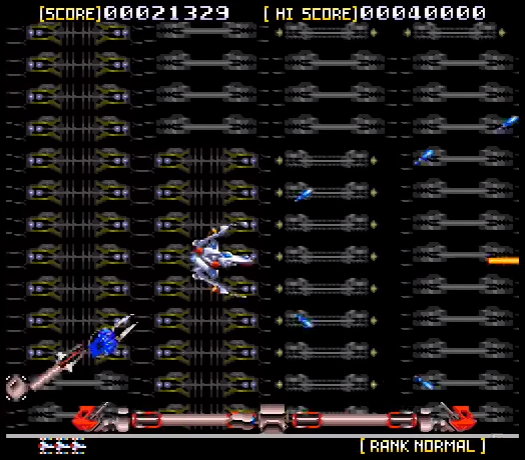 (This suggestion from @qazimod)

Shoot ’em ups (I hate the term “shmup”) are not one of my specialist subjects. Over the years there have been very few I’ve actually enjoyed (perhaps one day I’ll talk about those), mainly because I find them too hard and/or too similar. I am, of course, mainly talking about 2D shooters here, from 1942 to Geometry Wars via R-Type rather than “into the screen” shoot ’em ups like Afterburner or first person shooters like Call of Duty – they’re a different kettle of bananas entirely. I’m also ditching platform shooters like Contra and Midnight Resistance, as they’re not the same sort of thing either.

To start vague, because I’m not very good at games of this genre, when given the choice I almost always veer towards better spread. You don’t need to aim so much if you’ve a seven-way stream of bullets. Of course, they’re all as weak as cheap tea so although I can hit everything on the screen at once, in many games I come unstuck through being all mouth and no trousers.

The other way to go is to Tim Allen it all up with more power. Then you have the problem whereby all but bosses fall in a single hit, but you have to navigate around the screen a lot more to shoot stuff. Less preferable for me, I think.

Options/drones/wingmen/etc. fall somewhere between the two. They add both additional firepower and usually extra spread, albeit limited in both areas. Usually they circle the player or follow their path, but sometimes they’re AI controlled and will seek and destroy. All of these have pros and cons, but options in general are difficult to rely on. In some games, you can position them manually, however, which helps.

Homing shots are rarely useful if they replace your main weapon. Inevitably they target the wrong foe, are slow firing, and rarely take the fastest, most direct route to their target. They’re often handy for bosses though, as you can concentrate on avoiding attacks without needing to worry about aiming for weak spots.

Charge shots, like that first seen (I think! I’m not counting Mega Man) in R-Type are useful for bosses but shoot ’em ups are generally much too frantic to allow time to fully charge.

Bouncing shots are stupid except in rare circumstances. Smart bombs are awesome but almost always in limited supply. Backwards shots are handy in some games, but I don’t make use of them that often.

So that’s my thoughts. Specifically the best one though? Well, there’s a shoot ’em up for the Sega MegaCD called Sol-Feace. It’s also called Sol-Peace and Sol-Deace in other regions and on other platforms for no readily available reason. Anyway, the thing I liked about Sol-[D|F|P]ease is how your ship has three guns to begin with – one standard one in the middle, and others on the top and bottom of your ship. What’s clever is that these two additional guns can be angled, and – even better – can collect their own upgrades!

This means your ship can be all things to all people, with three-way spread if you want, but with a laser for one gun and bombs for another.

If you need spread, you’ve got it. If you need firepower, just switch your guns forward and you’ve got that too. My preferred setup? Three lasers, sweeping in and out as necessary. Excellent.

Oh, and as an aside: the best thing ever in shoot ’em ups isn’t a power up at all. Or a boss, or anything like that. It’s the sound sample from Project-X on the Amiga: “Guns! Power up!)