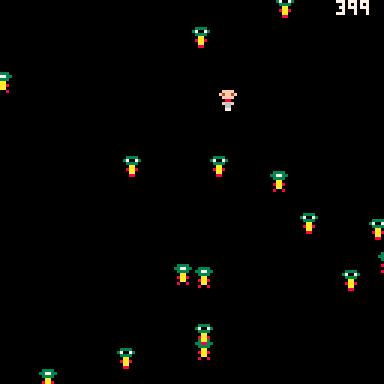 Today at work our training was learning PICO-8 and writing games. Since I’ve already written games (well, game and a bit of a game) with PICO-8, I had time to start and finish the basic premise of the game I referred to once before as “DHALOPHITTRAF”: David Has A Lot Of Problems He Is Trying To Run Away From. 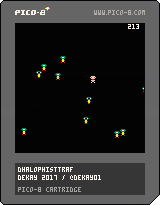 It has turned out more or less how I expected it to. It reuses a surprising amount of code from my FR project, mainly to do with collisions, even though it’s obviously a totally different sort of game.

I have some ideas on how to improve it, although they’ll probably be for a sequel rather than an update to this as I consider it done. Albeit rather plain and simple – but then the idea was to get something started and finished in a day.

One of the earliest builds was quite funny. I had the enemy generating routine up and running, spewing out baddies with random velocities and starting positions, but hadn’t implemented erasing them from existence once they go off the screen. After watching it for a few minutes, boggling at how many sprites the PICO-8 seemed to be able to handle without slowing down, it ran out of memory. OK, so it wasn’t that funny.

Anyway! You can play it below 1, or if you’re very impressed (or should that be easily impressed?) you can have a look at my itch.io page where it lives along with Advanced Lawnmower Simul8or and Sandman.