Warning: Trying to access array offset on value of type null in /homepages/38/d70479217/htdocs/lofi/wp-content/themes/kahuna/includes/loop.php on line 295

This isn’t due for another two days, but a glitch in the Xbox Live Arcade banners allowed me and (at the time of typing) 13 other people access to downloading it.

And so, for the first time ever, I managed to be top of a leaderboard on an Xbox 360 game. A leaderboard of 14 people, but still – there I am: 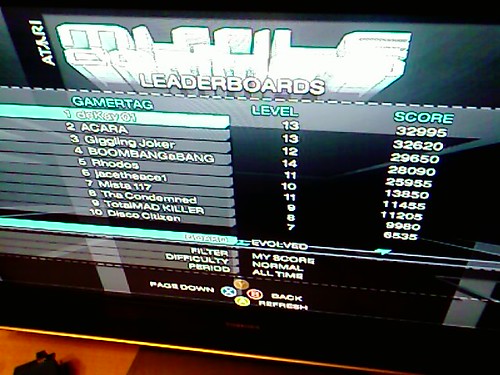 As for the game itself, well – it’s pretty good. It works surprisingly well with the pad (although the “Classic” mode, which is the original arcade version isn’t so hot on the pad), and looks nice enough. I’m just not very good at it. Good enough to be Best In The Entire World, but still not great, you know?