Warning: Trying to access array offset on value of type null in /homepages/38/d70479217/htdocs/lofi/wp-content/themes/kahuna/includes/loop.php on line 295

Yes, it is going very slow. Partly because I’m not playing for long each sitting, and partly just because that’s how the game is.

Still great so far though! Phoenix has been dropped in it a bit by his girlfriend Dottie, who was supposed to be defending him but ended up making it worse. Mind you, I’m with Mia in that she was clearly pretending to cover for him, and now she’s lying.

Mia doesn’t like her either, as she isn’t too keen on the way all the men in the courtroom are fawning over her… 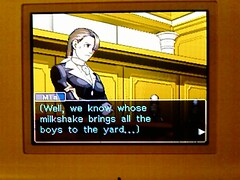