First up was Pairs. It’s a pelmanism-style matching pairs game, but you have a little man you have to guide to the cards to flip them, while avoiding the baddies. It was fun for a bit. 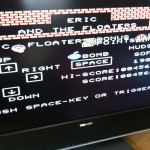 Then I played Eric and the Floaters. The original Bomberman game. Coincidentally, I’d actually blogged about this very game here only yesterday – even putting the Spectrum game on my site to play. Amazing! It’s virtually the same as the Spectrum version, except the deadly balloons have little smiling faces on them. Evil smiling faces.

Next was Hunchback. Which was very hard. I got as far as the screen with the arroes that shoot from the left, but couldn’t get past it.

Finally, International Karate. No, not “+”, the original. It was OK, but I couldn’t get to grips with the controls. Part of the problem was the stupidly loose Toshiba joystick with far too much travel.