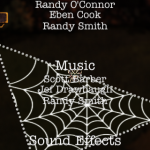 T’other day, there was a big sale on the App Store, with loads of iPhone games reduced to 59p and £1.19. S:TSOBM was one of those, and I bought it.

And so it came to pass, it was the second iPhone game I completed!

Took about 3 hours in total, I’d say. Yes, I could have done it quicker, but I tried to get every insect on every level, so it took longer. So there.

Perhaps I should explain the game? OK then. You’re a spider, and by using various swipes you can jump around the rooms and environs of the manor house, spinning webs (you draw the edges, and it fills in the middle) in order to catch flies and other insects. Once caught, you eat them, which gives you more silk to make more webs. Eat enough in a single room, and you move on. Simple!

There are many puzzle elements to the game, in both how you create the webs (spanning large gaps, for example) and how you work the insects into them (e.g. trip a light switch to coax the moths out), but with no time limit and, for the most part, more than enough silk, the levels are more relaxing than taxing. Unless you hate spiders or something.

Lovely game. Now to play the other game modes!