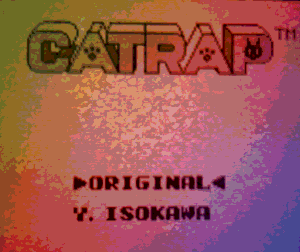 That’s right – to celebrate having completed the wonderful Catrap, I’ve visually tinkered with a shot of some of the game ending sequence. An exciting bit, I’ll sure you’ll agree. Yes.

Some of the final levels, especially the “??” level unlocked once the previous 99 were complete, were a right pain. Many were of the form of huge swathes of blocks and baddies, where removing them in the right order so others drop down in certain ways, which I find difficult as it’s hard to visualise how the level will look three, four, or 27 moves in the future. Levels where you generally just have to find a way of reaching a couple of baddies, or getting a block from A to B are far easier to plan.

But I managed it eventually, and verily, the game was won. My reward? I got to play the new Sonic Generations demo on the 360. And that is a story for another post.