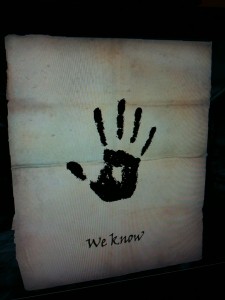 So since I last played, I’ve made my way to Windhelm (although didn’t do much there apart from get roped into a quest for an orphan who is a psycho), and then onto Winterhold from there. In Winterhold I joined Hogwarts, and went excavating some ruins or something. Read about zleventybillion books in the college, and then headed back to Whiterun for a bit.

I then realised that somewhere along the way, I’ve lost Lydia. No idea where, but I think the last time I saw her was when I was attacked by a dragon. She’s probably dead, but there’s no way of knowing if she is, or if it’s just a bug or something. Oh well.

I then went over to Riften, via a few mills and villages, and got attacked by a lot of bears and spiders. In Riften I completed a couple of quests, including killing the evil orphanage ruler for PsychoBoy, and now I’ve been given The Black Hand note. I think this is going to kick off the Dark Brotherhood questline.

I think I’ve also started a Thieves’ Guild one too, having stolen a ring and planted it on someone, as requested by some other guy in Riften.