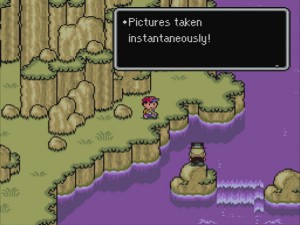 I’ve never played Earthbound before. That’s not really surprising, as it never came out in the UK, and I wasn’t that much of a SNES gamer anyway – certainly not to the point of wanting to import US games.

I didn’t really know that much about the game either, apart from that it was an RPG, set in roughly the modern day, in a relatively “normal” setting, and was absurd. And had Ness from Super Smash Bros in it. Or the other way round. Or something.

Naturally, given all this I knew about Earthbound, I bought it the very second I could, despite the (apparently, according to some) horrendous overpricing. How very dare Nintendo try to charge a ludicrous SEVEN POUNDS for a SNES game that never came out in this country and costs just £200 on eBay? *rolls eyes*

Enough of that. More of the game. Oh the game! Oh, the silly pervy nonsensical game! The game I’m utterly lost in and have no idea what to do next and it just doesn’t matter.

I’ve been sent out on adventure, in the middle of the night by my mother (who doesn’t seem especially concerned for me), whilst my seemingly absent father sends me money on an hourly basis to my bank account to fund my endeavour. My little sister has set up a delivery company, and one of my neighbours invited me into the hole he’d dug under his house to she his “secret”, but I had to come alone. Uh huh.

My dog can talk. Other dogs can also talk. The police are obsessed with roadblocks. I went to the first town, Onett, and had to fight the local street punks and their leader (and his robot) so that the police (whom I then had to fight) would let me explore an area of the map populated with homeless cabaret performers, so that I could reach a cave and finally make it to a giant footprint in the ground which I then recorded the sound of in a stone.

Then I went to Twoson (the second town – can you see the naming scheme?) fighting possessed Retro Hippies and Salary-men before ending up with a mushroom growing out of my head that kept flipping the direction controls around which the doctor couldn’t help me with but a creepy old guy who hangs around the hospital waiting room was happy to give me $50 to buy said fungus. And I bought a mouse.

Then the bike shop man gave me a free bike, and I went to the market which was run by a criminal who wants me to find a lost girl from the local nursery for him, while other characters in town variously say I should meet her and/or she’s been kidnapped. The two roads out of Twoson were impassable, one because the tunnel was full of ghosts which carry you out once you’re halfway through, and the other because a giant pencil was blocking the path (as the game says) “for some reason”. Naturally, a smelly fat boy called Apple Kid and who is one of two inventors in the town, is able to help by conveniently inventing a pencil eraser for $200 and some food.

This allowed me past the pencil, and into an area full of UFOs and sentient trees (that explode) and robots and other baddies. Some of which cause me to catch a cold because lasers. I had to run away after a while because my health and PP (like magic points) were low, and the magic butterflies that appear randomly to replenish PP by “relaxing you” (uh huh) didn’t appear frequently enough to rely upon them.

And I then bought a for sale sign, which I’m unable to sell. And a man stops me every now and then to take pictures of me, asking me to say Fuzzy Pickles. Frankly, I’m concerned there’s no Operation Yewtree in Earthbound, as it bloody needs it. Every other person is a pervert.

All this is how far I’ve got. I’m guessing there are at least another six areas to get to, judging from one of the items I’ve collected, so there’s miles to go yet. And I’ve nobody else in my party either, aside from my dog and the boy next door who left ten minutes into the game.

Earthbound reminds me a lot of Contact (for the DS), which is no bad thing. It’s certainly a lot of fun, and I’m loving the completely nuts story. Definitely going to get me my seven quid’s worth.