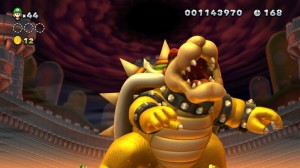 Well, that was easier than I expected. I thought some of the later levels would be hard as nails, but due to being pretty short, they weren’t. Even Bowser wasn’t too difficult, despite the lack of restart points (meaning if you die on the boss, you have to restart the level completely!), taking only two attempts.

Disappointingly, he was the same boss as with Mario, although his attack pattern was slightly different.

With him defeated, I set about completing some of the other levels I’d skipped, missed, or hadn’t unlocked yet. I’ve not done them all, and perhaps won’t – too many other games to play – but I’ll certainly do some more at least.