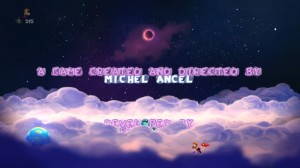 By “completed”, I of course mean, I’ve got to the end credits. See. I don’t have all 700 teensies, or a million lums, or have done all the Origin levels (I haven’t even unlocked most of them) or opened Living Dead Party, but I’ve completed the story.

I played about 60% of the game in co-op with my daughter, which was fun. She generally took on the role of Murfy for those levels where he’s a part, and she did a pretty good job too – even on the harder levels. The last 40% of the game, though, I played through myself.

It’s a great title. It’s better than Origins (not least because it contains Origins), plays fantastically, looks beautiful, and is challenging without being impossible. It is somewhat easier than Origins, however, with the final boss being something of a walkover. This was only slightly disappointing though.

However, despite all the fun and greatness, there’s a niggle that it isn’t quite as good as lots of people have said. I’m not sure what. It feels much bigger than it actually is, which might be it. Or it could be the lower difficulty. Or maybe the shortage of the excellent music levels. I don’t know.

I’m glad I got the Wii U version, though, as the 360/PS3 versions would really be missing out with the lack of proper Murfy levels and two-screen co-op. And everything said, I haven’t actually paid for it, so that was a bonus too!