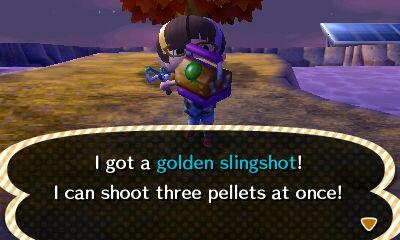 And still I’m playing this. I’ve yet to miss a single day of play, in fact. That puts me past the number of consecutive days played of any previous version for sure, and, past the number of days in total I’ve played both Wild World and Let’s Go To The City. I don’t recall how many days I actually played the Gamecube version for though. I know it was a lot, and pretty much a year from start to finish, but I know I didn’t play daily.

A reward today was this – a golden slingshot! I don’t know how this was triggered, and it was only by fluke I saw it floating overhead, but there it is. Woo!

In other AC news, I’ve been collecting Harvest furniture from T&T, and have been getting a few items of Mushroom furniture by picking up things which look like mushrooms and are the size of mushrooms, but in fact are sometimes lamps and beds and cupboards and stuff. Obviously.