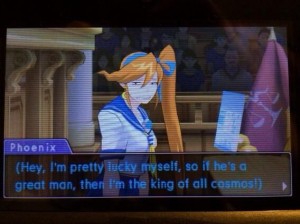 So, so good. The plots in these cases are just so well thought out. The way Apollo/Athena/Phoenix suddenly turn an inescapable “guilty” verdict into the exact opposite by reversing the way the murder could have been committed is always masterful.

The drama in the courtroom is tense, and the buildups to the end of each case are as adrenalin fuelled as much as any FPS boss battle. Not bad for an interactive story about lawyers…

This evening I finished up Case 4, which ended on a pretty massive bombshell. Well, not literally a bombshell (for once – one of the other cases ended with an actual bomb). I was expecting a twist, but the character who has now been fingered as the murderer is not who I was expecting.

Some fingerprints show the murderer to be

but I was expecting [spoiler]Apollo[/spoiler]