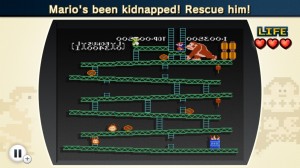 Well this was a lovely surprise from Nintendo. No idea it was coming at all, and then suddenly at the end of last week’s Nintendo Direct, Iwata went all Apple and said “Take a look at this…” and “It’s available now!”.

There used to be a game called Game Centre Challenge, which had longer-than-Wario-Ware but still short challenges based on retro games. Except those retro games didn’t actually exist – they were fake retro styled titles. This is real, with real NES games replacing the not-real NES game clones. And, I believe, it’s by the same developers.

You’re given a set of NES titles, broken down into short challenges. Like, collect 20 coins in Mario before the time runs out. Or smash 5 barrels in Donkey Kong. Or beat the first boss in Zelda without losing any health. You’re rated up to three stars depending on how fast and well you manage this, and as you gain stars you unlock more games and challenges.

In addition to the breakdown of old games into what is essentially boot camp for game skills, there are various remix levels which make things different. Like, how about playing Mario like an endless runner? Or Ice Climber with just a spot of light following you, while everywhere else is dark? Or Pinball with invisible flippers? Or Donkey Kong as Link instead of Mario – and Link can’t jump?

Also as you play, you get some sort of score called B. I’m sure it’s a reference to a game but I can’t recall which. The symbol is like that for Bitcoins so I’ve been assuming it’s that. Every thousand or so B you obtain, you unlock stamps of characters and other sprites from the games, which you can use in Miiverse to make hilarious (well, mine are hilarious) pictures. I’ve found unlocking these stamps to be more of a draw to play the game than the stars, actually.

I’ve heard there are about 200 challenges in total, so 600 stars up for grabs. I have just 250 so far, but I do have 3 for most of the challenges I’ve attempted. I’ve not got that many Rainbow Stars (for being even better than 3 stars), although I have fully Rainbow Starred all the Pinball challenges.