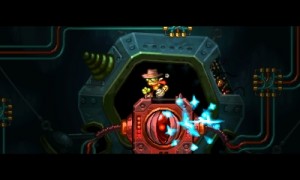 I was a big fan of the 360 indie game Miner Dig Deep, and many years ago loved Diggers on the Acorn and Amiga, and it was my enjoyment of those two games that made me want SteamWorld Dig. The stars aligned and I was given some eShop credit just as this was on offer, and so I snapped it up.

I’m glad I did. It’s very much in the same vein as those two games I’ve already mentioned, with more combat and much more impressive graphics. Being able to wall jump gets rid of the concern you might dig your way into an inescapable pit, and the ability to carry a teleporter (which takes you back to the surface) means you never need to be too far from home, and the upgrades shop.

It’s a short title (I clocked it at just over five hours), but it’s well worth the journey. The only real downside to the length is it’s difficult to stop playing so the end comes all too quickly.