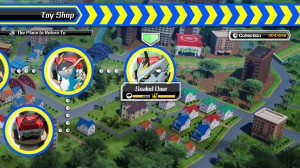 With Mario 3D World completed in 2-player with my daughter (after completing it in single player), we moved back to this. It turns out there weren’t actually that many levels left, and with our ridiculously overpowered White Kyurem NFC character we didn’t exactly struggle.

I’m not going to sing the game’s praises too much. It’s a very simple button basher (even more so than the Wii and 3DS precursors), with very few differences between levels. Even having different Pokémon means very little, providing they actually have some decent HP and moves. Yes, there are “defend the fort” levels, and “beat the boss in under 120 seconds” levels, but ultimately, you play every level the same – point your ‘mon at the baddies and hammer A and sometimes B.

Having said all that, there’s not actually much to dislike. It’s fun, it’s colourful, and it’s multiplayer. Shallow and repetitive aren’t features many 5 year olds care about, and frankly, I didn’t really mind either.

My only real complaint is that you can’t upgrade your non-NFC Pokémon. It’s not important; As I said, there’s little reason to change character, but when your co-player wants to use “the little crabby one!” with “power” of 150 on a level that recommends 1500+, it would have been nice to be able to spend some of those coins you win bumping Little Crabby’s stats up a bit.