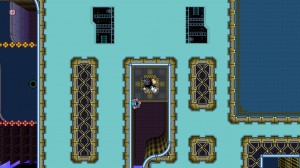 It has been a long time since I’ve been hooked on a shooter. Obviously, Scram Kitty isn’t just a shooter. It’s more a… erm, puzzle game? Platformer? All of the above?

It’s damn hard, that much is certain. So how come I got hooked on a shooter (not my sort of thing) which was damn hard (I’m a wuss with hard games)? Aside from it not being a shooter, of course. Despite all the shooting. 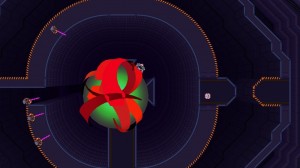 I don’t know. Some of it is the gorgeous pixel art. Some is probably the clever game mechanics of being stuck to rails and every surface having gravity. Some is the gotta catch ’em all gameplay. The main thing is it’s addictive and I just wanted to keep playing.

Having now completed it, I’m not sure I’m as compelled to keep saving kitties as I was. You need 70 to open up the last level, and I suspect it’s 100 in total to get them all. I just don’t have the skill to do that. Hitting 70 was a struggle, and, truth be told, once I hit 50 I thought I was done. As fun as the game is, and as great as it feels to get all the kitties in a level, I just can’t bear to spend hours more chasing the same cat over and over. 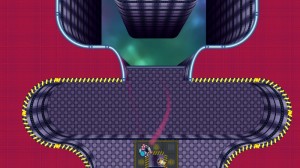 I don’t think that matters though. I’ve had lots of fun and really enjoyed it. It’s definitely one of the better games on the Wii U eShop, and I can fully recommend it to anyone – shooter fan or not. It’s unique, stylish and rewarding.

And it’s full of cats. What’s not to love?