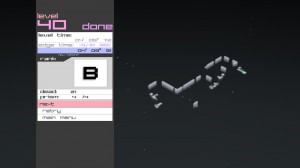 None of the levels are especially hard, so it was only a matter of time before my play on this, sporadic as it was, brought me to the end.

Some levels were fun, and overall the game is good, but a few levels are ruined by making walls and floors move without giving you time to react. You have no option but to die, because you don’t know what is coming next. Sure, dying isn’t that terrible here – you’ve no limit on lives and you can still S rank a level even if you peg it multiple times – but those levels where you only progress a little bit further each attempt then die because something else unexpected happens, over and over, take something from the formula.

Still, it was less than two quid, kept me entertained for several hours (over many weeks), and the music and art style are both fantastic. Even if there aren’t enough tracks so they repeat just a little too frequently.

I’ve still got the bonus levels (bonus == optional) to finish off, so it’s not all over yet, but the main two game modes are done, so it’s completed in by book.