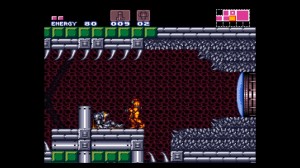 To my eternal shame, I have never completed Super Metroid. In fact, I’ve never played it for more than the first five minutes. I don’t know why I decided to rectify this situation now, but I did.

Maybe it’s the fun I had with of-the-same-era Earthbound, or maybe it’s a Backlog Fighter/OCD Unplayed Home Screen Games combo prompting me. I’ve always intended to play it, and I’m a big fan of the two GBA Metroid games so I was pretty sure I’d enjoy it. It just never happened. Until now!

So far, it’s been pretty much what I expected – similar to the GBA versions only with bigger and slightly worse looking sprites. I’ve never really played the original Metroid, or the Game Boy Metroid 2, so the intro to Super Metroid was a little lost on me as it (I presume) replays the ending to one or the other of those. 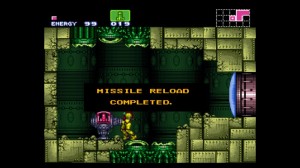 The controls are a little odd, specifically pressing L and R to aim diagonally down and up respectively, but it didn’t take too long to get used to. Not having the map always on the Wii U Game Pad, although never going to happen, is a shame – especially after relying on it so much in Knytt Underground recently.

There’s very little signposting as to where you need to go, so I’ve found that if you’ve not unlocked the map you’ve no idea what lies in each direction so you’re exploring blind. Which is the point of an exploration based game, I suppose, but I get get somewhat lost for ages.

Well, not so much lost, more stuck. I’d descended into Norfair, picked up the high jump, and then couldn’t find anywhere else to go. I couldn’t backtrack as I needed the ice beam to freeze baddies to create steps, I couldn’t go another way because the room was too hot (I later found I needed the Varia Suit here), and another route was blocked as I couldn’t run fast enough. In addition, there was at least one yellow door which I didn’t have a weapon to open. Stuck. 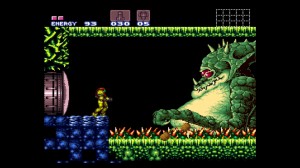 Until I found that bombing (literally) everywhere revealed a few extra areas – netting me the “Spazer” weapon and eventually access to Kraid, who was a lot easier than I was expecting once I saw he/she/it was three screens high. In fact, the enemies have been surprisingly easy so far. Knowing where to go, less simple.

After leaving Norfair though the overheated area, I found some new bits to explore which gained me the Speed Booster and, utilising this in Norfair where I previously couldn’t run fast enough, lead me to the Ice Beam and then another new area – leading me back to the planet’s surface via the Power Bomb, which can open yellow doors. Excellent.