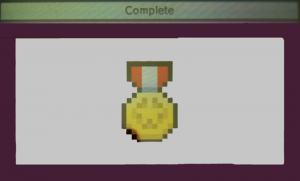 Ta dah! There’s not much to say, really. It’s more Picross and I completed it.

I have two things to mention, though. The first is about the length of the game – it’s a good 8 hours shorter than Picross e2 (and about an hour shorter than the original), which is a bit disappointing.

The other thing is the Mega Picross puzzles. I don’t like them. They’re like normal Picross puzzles, only the numbers sometimes – but not always – span two rows or columns. For the easier puzzles, that’s fine, but some – the final one especially – don’t seem to be possible without guesswork, or at least some pretty shaky assumptions. It just adds a level of complexity that is unnecessary and unneeded.

Still, I did enjoy it, despite these two issues. Roll on e4…