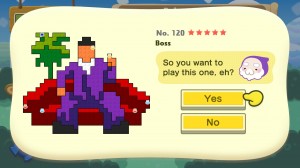 That’s clearly a pimp, not a boss. And it’s the final “main” level in the game. Which was really pretty difficult, mainly due to needing to set up so many blocks before you could progress to setting up other blocks. Having said that, I’ve had a few levels which I’ve struggled for half an hour or more on, and this took less than that.

With the main 120 levels done, and the end sequence watched (or rather, played – there’s a star-finding minigame over the credits), I’m still almost 120 levels short of doing all those available. I unlocked a new set after the credits, and there’s still the other game modes to do, so still plenty of game left.