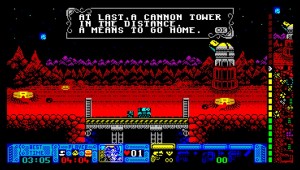 You know that thing you do where you completely forget you own a Vita? It’s pretty easy to do, as it is somewhat forgettable. Well, I did that. I was sat wracking my brains, trying to remember which games I’d started fairly recently but not finished, and all I could come up with were a few 3DS and Wii U games. I was convinced there were more than that. And of course there were – I’d forgotten about my Vita. Silly me. 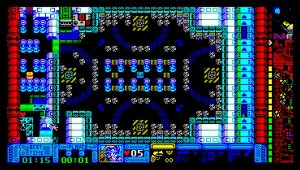 Having rescued it from the same hole my PSP spends its autumn years rotting in, I charged it up and set about finishing off Rock Boshers DX. Previously, I’d reached a level with two centipede things and a load of larvae, and was unable to get past it. Somehow, that only took two attempts upon returning, and I quickly blasted through a few more levels.

The almost vertically scrolling shoot-em-up level where you’re in a lift full of paratrooper baddies and helicopters and a UFO semi-boss was pretty difficult, and there’s a later level where you have to run laps of the screen (for the second time) which also gave me grief. Managed to get past them eventually, though, and before long it was the final boss. 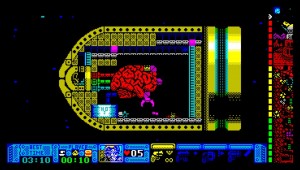 Or bosses, rather. There are several stages. First, you’re inside a massive bullet much like the one that you went to Mars in at the start of the game. Here you have a giant brain you have to shoot in each of its eyes as they appeared. You can also temporarily destroy baddie dispensers to get rockets, making the fight (probably intentionally) not unlike the Mother Brain one from Metroid. With the brain dead, you escape in a smaller bullet… 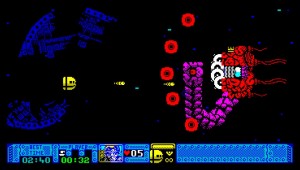 But of course the brain isn’t dead. It somehow still follows you and the game turns into a sideways scrolling (scrolling backwards, I might add) shooter, reminiscent of the Super Sonic fight at the end of Sonic 2. With the brain defeated properly, there’s yet another “final” boss, this time against the tall hatted man in a spaceship, who throws everything at you.

None of the bosses were especially difficult, so I’d soon won. Ending sequence and hint at a sequel and everything. Excellent.