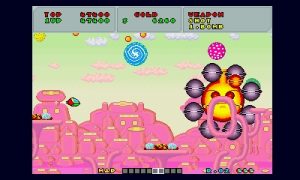 You may think that this is a somewhat short game. Eight short levels and it’s over. Right? How long can it possibly take to complete?

Oh yes, it was hard. Especially Level 3, for some reason, but even with the difficulty I still managed to reach the final boss at the end of the game in around an hour and a half. In fact, aside from losing a couple of lives, I beat 5/6ths of the final boss in that time too. It just took several hundred more attempts to beat that final part of the final boss. 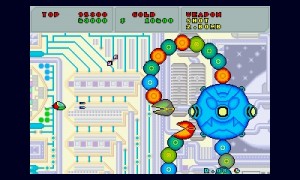 He starts with six blue… things, all lined up and ready to attack one after another. The first five are easy, and with the Wide Beam are all dead in seconds. The problem is, that the sixth moves too fast to shoot. He’s all over you and you’re dead before you can even use enough smart bombs to take him down. You can’t get many hits in either, because you have to run away from him immediately and you can’t shoot behind yourself. 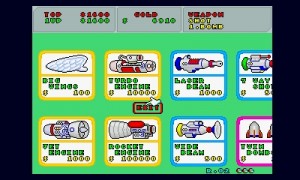 Eventually, after all those tries, I finally fluked it and dropped an un-aimable Heavy Bomb on him just as he was about to touch me. Phew!

In the process of building up gold to spend on the final battle, I replayed the earlier levels again, and after a while found I could quite easily make it from the start of the game to the very end boss attack without ever dying. And that’s including the Boss Rush. How I hate Boss Rushes. The point being, that even though some levels were bloody difficult, they became complete walkovers. Obviously my skills had increased. Or something. 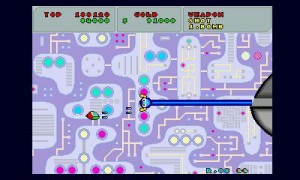 Coming to 3D Fantasy Zone without being a fan of the original (it looked great, but was too hard and I didn’t like the shop mechanic), I’m amazed that not only did I really enjoy this, but despite the number of times I had to replay bits to tackle the final boss, I never once gave up.

I’ve unlocked all the extras now too, including Upa-Upa Mode. I gave that a go, but I’m not sure I like it. The shop has gone, and now upgraded weapons cost gold either per second, or per bullet. I rattled through all my reserves in mere seconds! Hmm.