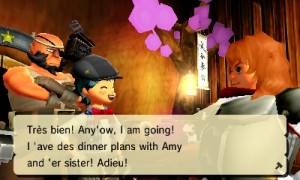 And that’s it! By the end it got pretty easy, as I realised that you only really need to make weapons for the main characters and fob off the NPCs with whatever you have in stock that most closely fits their request.

The final hour or two was mainly waiting. Each main customer came in one at a time, wanted “the ultimate weapon” to defeat the Evil Lord, and then came back a little later after I’d forged it. For a few of them, I’d already made the best weapon, but to kill time I forged new ones in case I managed to improve the stats through better forging. 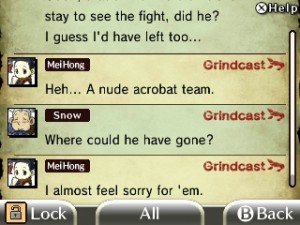 The forging in general was pretty hit and miss (ha!), as it wasn’t always clear which bits of metal you were supposed to strike and which you weren’t. Still, I struggled through without much difficulty, and late in the game I realised that doing badly in forging was actually a bonus as it mean you got more hits in and thus better stats. Which seems a bit backward. Improved things further by making use of the heating up and cooling down options, which I’d ignored early on. Also ignored were the additional “ingredients” for the weapons which supposedly improve them, but I found superfluous and usually just added them at random just because they were there, or just didn’t bother. 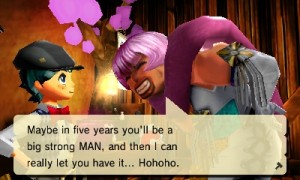 Technically, the game was completed once my first customer beat the Evil Lord, but you get an extra achievement (or Feat or Accomplishment or whatever the game calls them) for getting everyone to beat him so I did that. Apart from the coward bloke who just ran away, but it appears that was what was supposed to happen.

Then I found out that I could have avoided all the waiting by holding down the L button to speed up time. Sigh.