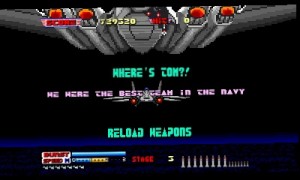 Yes, I’ve returned to another incomplete game to finish it off. Technically, I had already completed it, but I’d not managed to finish Special Mode which is unlocked after reaching the end of Arcade Mode. I’d had a couple of attempts, but failed. Unlike Arcade Mode, you can’t restart from any previously reached stage on Special Mode – you have to start from the beginning each time. Annoyingly, I’d reached the final stage on one of my attempts, then lost the last of my lives.

I fared better today (probably because I hadn’t previously realised you got a “bullet time” button in Special Mode), beating the final “boss” (he’s not really a boss) and learning the Truth About Tom. Actually, it’s still pretty uncertain as to whether Tom is a traitor or not. Or perhaps he was cloned by the enemy. Who knows. It doesn’t matter.