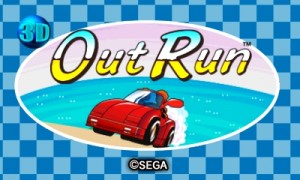 Long awaited by many, 3D Outrun finally found its way onto the European eShop today, and I had to buy it instantly. It’s a superb conversion, actually improving on the original arcade game by making it widescreen and 60fps (not that I can tell it’s not 30fps any more – I’m fps-blind) and most importantly, 3D. 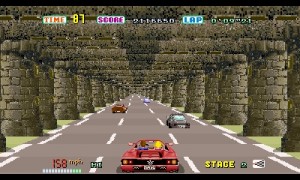 It’s hard to express just how fantastic the 3D effect is. It was great in 3D Afterburner II and 3D Space Harrier, but in 3D Outrun it is truly astounding, especially on stages with road furniture on both sides and bridging over the road. You really feel like you’re in a tunnel. It’s incredible, and adds to the feeling of speed too.

This version also adds two extra music tracks. Neither are as good as Magical Sound Shower, but then, that’s a near impossible task. They’re at least as good as Splash Wave and Passing Breeze though, and it’s hard to think they were not originally in the arcade version they sound so well suited. 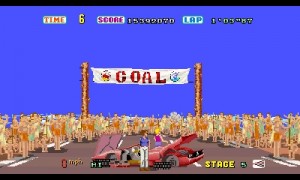 As the title of the post suggests, yes, I’ve completed it already. It isn’t a long game, and it’s a bit easier than I recall the arcade version being, but it is still so much fun to play. I ran through it five times (plus a few more where I ran out of time) reaching each of the five goals. Each one unlocks a “car tune-up”, such as better cornering or a higher top speed, and using these changes the colour of your car. It does feel a little odd to be driving a yellow or purple not-Ferarri (actually, the car seems to be an Armani now – no, really, look at the logo), it has to be said.

Excellent game and impossible to play without a massive grin. Especially if you pick Magical Sound Shower on the radio.