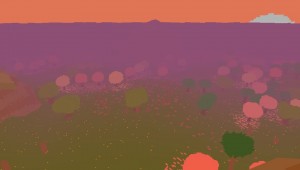 Through various deals and sales, I managed to pick this up for just £1.44 today. I’ll buy any old crap at that sort of price, but a few people warned me against it, saying it wasn’t even worth it for free.

Pff to them, I thought. I can decide myself. But what the hell did I just buy? A walking around a pixelated island in some sort of dream simulator? I don’t know.

I started off in the see just off the coast of an island, in lovely sunshine. I slowly walked (swam?) towards the shore, and found some trees dropping big pixelly blossom all over the place. Some flowers from an Atari 2600 game gently swished in the breeze, and large monoliths formed a line which I proceeded to follow. 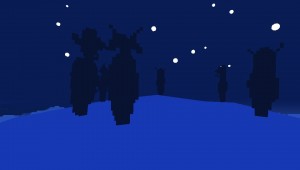 Some bouncing things caught my eye, but they ran away as I neared. I was close to a mountain so I climbed it, finding six… things in a circle on top. One of them looked a bit like a silhouette of a cowboy. Nothing happened.

I proceeded over the mountain, and on my way down I disturbed a group of what were possibly chickens, so again I chased them. One went into the sea and presumably drowned. The others escaped. 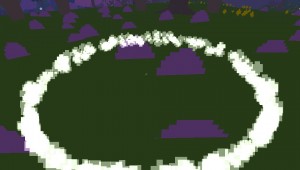 By now it was getting dark, and fireflies, or pixels representing fireflies, floated around the trees. I noticed some flickering lights in the distance, and headed towards them. As I neared, I realised they were inside a stone circle, and were collecting and swirling. As I watched, they sped up, becoming a small ring, which I stepped inside. Time suddenly sped up, with the sun and the moon flying across the sky and days passing quickly. It reminded me of the film of The Time Machine.

Everything faded to white, then came back. Were the trees now greener? It seemed that way. 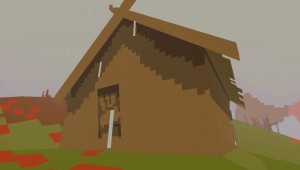 I found a path, so followed it. A dead end. I retraced back to a fork in the road and found another road. After walking along it for a while, more pixels which may or may not have been dragonflies flew around, and possibly-grasshoppers hopped. In the grass. Like they do. Somehow, once night again fell, I found myself back at the stone circle with the lights, and again I entered it.

Now I’d realised the circle advances the seasons, as the trees were red and brown, with pixel-leaves strewn around and mushrooms (some of which sang and vanished as I drew near) grew in clumps here and there. Autumn. 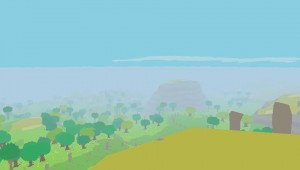 I came back to the beach, and followed it until I’d completed a lap of the island. A large rectangular hollowed out tree served as my start and end point marker, and an achievement trophy popped as I passed the finish line.

The rectangular tree was peculiar, in that walking up to it caused the sky to become patterned like it was part of a castle wall, and by accident I walked into and through the tree, which popped another trophy and teleported me to another part of the island. 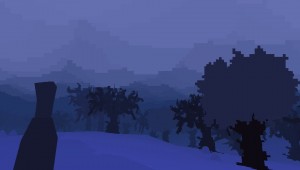 Once more night fell, and, again attracted to lights in the distance I came across the stone circle for the final time. Autumn became Winter, and the island was covered with snow.

Walking became even slower, and the clouds seemed to draw closer, until somehow I’d walked not only through them, but up into the sky. The mountains below were gradually covered in cloud until everywhere was white…

…and then the game ended. What.